Turkish-Omani Business Council was established in 2006 by the agreement signed with “Oman Chamber of Commerce & Industry” within the framework of Foreign Economic Relations Board (DEİK) of Turkey. The Business Council aims to improve trade volume between the two countries, provide mutual investment opportunities, develop the Turkish-Omani cooperation in 3rd countries and introduce Oman to the Turkish economy.

Oman’s economy depends on oil and natural gas. Oman is an important exporter of LNG in the world. However, due to the limited reserves of oil if compared to those in other Gulf and Middle East countries, Omani authorities set policies to diversify the economy and strengthen other sectors besides energy. Construction, tourism, electric energy, aviation, highways, defence, information technology, telecommunication are prominent sectors supported by the government.

The Turkish-Omani Business Council organizes annual meetings with the counterpart institution Oman Chamber of Commerce & Industry both in Oman and Turkey. During the meetings, studies evaluating the investment climate in Turkey are mainly discussed. 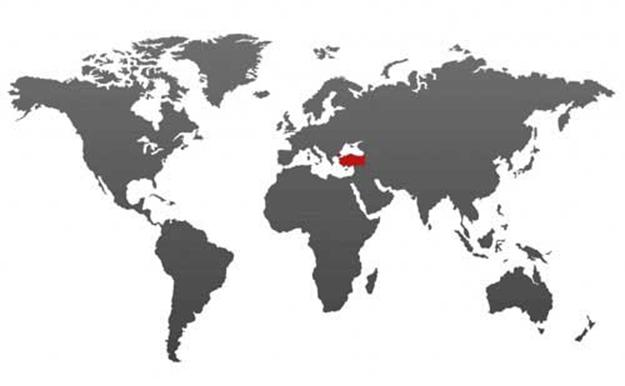 The Turkish economy has shown remarkable performance with its steady growth over the last eight years. A sound macroeconomic strategy in combination with prudent fiscal policies and major structural reforms in effect since 2002 has integrated the Turkish economy into the globalized world, while transforming the country into one of the major recipients of FDI in its region.

The structural reforms, hastened by Turkey’s EU accession process, have paved the way for comprehensive changes in a number of areas. The main objectives of these efforts were to increase the role of the private sector in the Turkish economy, to enhance the efficiency and resiliency of the financial sector, and to place the social security system on a more solid foundation. As these reforms have strengthened the macroeconomic fundamentals of the country, the economy grew with an average annual real GDP growth rate of 5 percent over the past decade between 2002 and 2012. 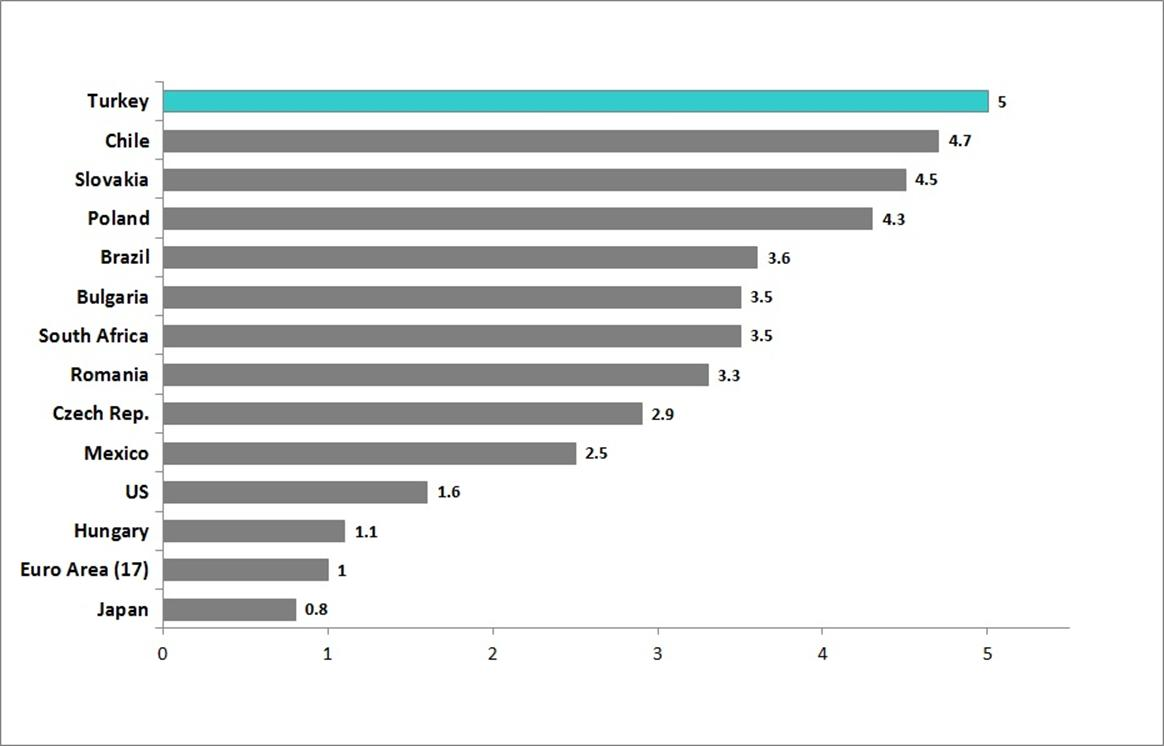 Moreover, Turkey’s impressive economic performance over the past decade has encouraged experts and international institutions to make confident projections about Turkey’s economic future. For example, according to the OECD, Turkey is expected to be the fastest growing economy of the OECD members during 2012-2017, with an annual average growth rate of 5.2 percent. 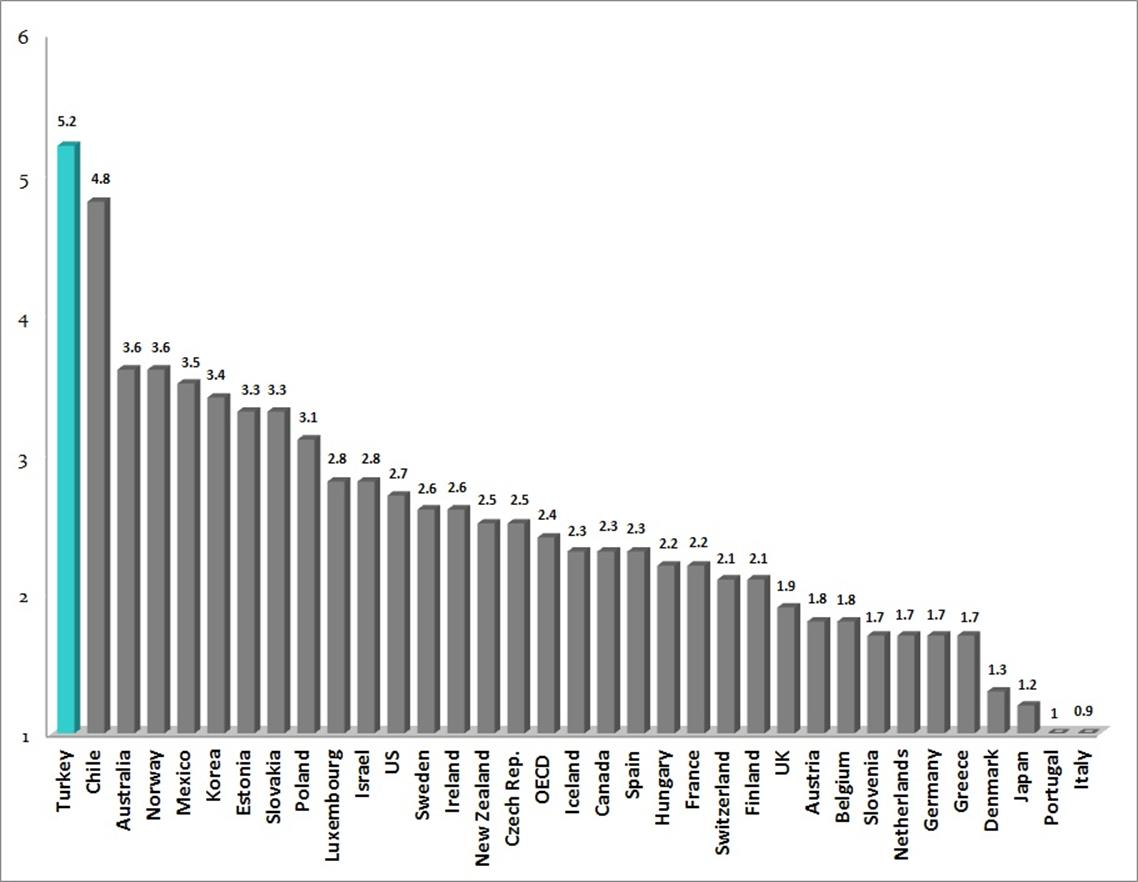 Together with stable economic growth, Turkey has also reined in its public finances; the EU-defined general government nominal debt stock fell to 36.1 percent from 74 percent in a period of nine years between 2002 and 2012. Hence, Turkey has been meeting the “60 percent EU Maastricht criteria” for public debt stock since 2004. Similarly, during 2002-2012, the budget deficit decreased from more than 10 percent to less than 3 percent, which is one of the EU Maastricht criteria for the budget balance.

The visible improvements in the Turkish economy have also boosted foreign trade, while exports reached USD 153 billion by the end of 2012, up from USD 36 billion in 2002. Similarly, tourism revenues, which were around USD 8.5 billion in 2002, exceeded USD 25 billion in 2012.

-         Institutionalized economy fueled by USD 123 billion of FDI in the past decade and 13th most attractive FDI destination in the world (2012 A.T. Kearney FDI Confidence Index).

-         Robust economic growth over the last decade with an average annual real GDP growth of 5 percent.

The Constitution emphasizes that the Turkish state, with its territory and nation, is an indivisible entity, and a secular, democratic, social state under the rule of law. All individuals are equal without any discrimination before the law, irrespective of language, race, skin color, gender, political orientation, philosophical creed, religion and sect, or any such considerations. The 1982 Constitution recognizes all basic human rights and freedoms such as freedom of speech, freedom of the press, freedom of residence and movement, freedom of religion and conscience, freedom of thought and opinion, freedom of expression and dissemination of thought, freedom of association, freedom of communication, the right to privacy, right to property, right to hold meetings and demonstration marches, right to legal remedies, guarantee of lawful judgment and right to acquire information.

Parliament has passed many constitutional amendments to make the 1982 Constitution more democratic and to expand democratic rights and freedoms in the country. These efforts gained significant momentum after the EU recognized Turkey as a candidate country in 1999 and later agreed to start full membership talks with Turkey in 2005.

Legislative power is vested in the Turkish Grand National Assembly (TGNA) on behalf of the Turkish nation and this power cannot be delegated. TGNA is composed of 550 deputies, while Parliamentary elections are held every four years. Deputies represent the entire nation and before assuming office, take an oath.

The functions and powers of TGNA comprise the adoption of draft laws, and the amendment and repeal of existing laws; the supervision of the Council of Ministers (Cabinet) and the Ministers; authorization of the Council of Ministers to issue governmental decrees having the force of law on certain matters; debating and approval of the budget draft and the draft law of final accounts, making decisions on the printing of currency, the declaration of war, martial law or emergency rule; ratifying international agreements; making decisions with 3/5 of the TGNA on proclamation of amnesties and pardons in line with the Constitution.

Judicial power in Turkey is exercised by independent courts and high judicial organs on behalf of the Turkish nation. The judicial section of the Constitution is based on the principle of the rule of law. The judiciary is founded on the principles of the independence of the courts and the security of tenure of judges. Judges work independently; they rule on the basis of personal conviction in accordance with constitutional provisions, law and jurisprudence.

The legislative and executive organs must comply with the rulings of the courts and cannot change or delay the application of these rulings. Functionally, a tripartite judicial system was adopted by the Constitution and accordingly, it was divided into an administrative judiciary, a legal judiciary and a special judiciary.

The executive branch in Turkey has a dual structure. It is composed of the President of the Republic and the Council of Ministers (Cabinet).

The President of the Republic is the head of State and represents the Republic of Turkey and the unity of the Turkish nation. The President is elected by popular vote among the Turkish Grand National Assembly members who are over 40 years of age and have completed higher education or among ordinary Turkish citizens who fulfill these requirements and are eligible to be deputies. The President's term of office is five years and one can be elected for two terms at most.

The President of the Republic has duties and power related to the legislative, executive and judicial branches, and is responsible for ensuring the implementation of the Constitution, and the regular and harmonious functioning of the organs of state.

Prime Minister and Council of Ministers

10 Reasons to Invest in Turkey

EMBASSY OF THE REPUBLIC OF TURKEY

OFFICE OF THE COMMERCIAL COUNSELOR 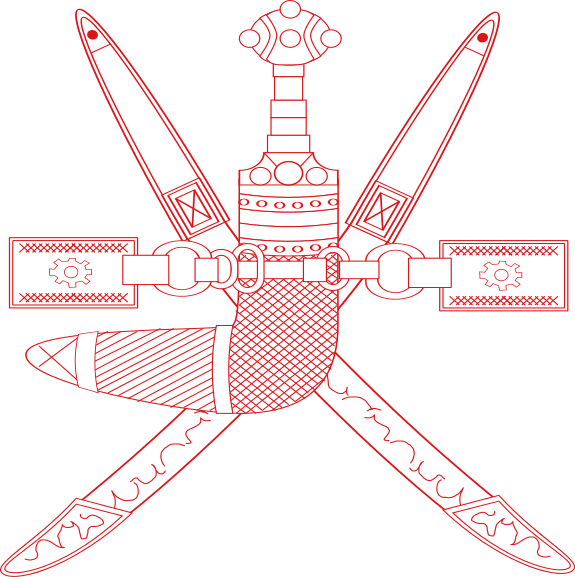